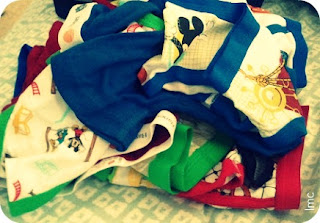 So I did it.  I took the plunge on Sunday. We are now in full potty training mode around here. I’ve been flirting with the idea of training him on and off now for quite a few months. I’ve read other blogs and websites trying to get some helpful tips. I was really motivated after reading a post from Jenn at Dainty Revelations.  After reading that post, I was like “o.k. I think maybe we can do this”.

I’ve realized that I had only one concern that has held me back from training him all this time. He doesn’t talk very much or that well. I’ve been scared that he won’t tell me  or others when he needs to go.  I really had to focus on all the other things he does wonderfully besides the talking.  He understands everything I tell him. He follows direction pretty well (as well as any almost 3 year old would).  He also has been very interested in sitting on the potty and trying to use it. So my thinking, why hold him back because he might not be able to verbally tell me if he needs to go.

I told B we were going to really try to go in the potty today. The diaper came off that morning and I introduced him to his new underwear again (he screamed the first time I tried to put them on him a while back).  When I slipped on the undies he screamed at the top of his lungs and threw the undies.  Now I’m thinking o.k. maybe he isn’t ready.  So I told him that he didn’t need to wear them we were just going to get use to trying to go on the potty.   I made him a sticker chart. Nothing fancy. Just a sheet of paper that says “B’s Potty Chart” and boxes for the days.  For the first day I thought, If I could just get him to sit on the potty for more than 5 seconds he could get a sticker. That worked pretty well.  That boy loves stickers and he really loves sticking them on a chart.
So half way through the day J asks B where his undies are?  He said big boys, like daddy, wear undies.  B goes and grabs his undies and lets J put them on him.  *Thinking* REALLY? child. You gave me the freak out of epic proportions not less than 2 hours ago and then you let daddy just put them on you like no big deal. ughhh. 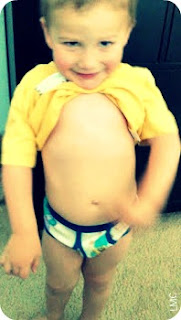 So he played in his undies the rest of the day except for nap time I put him in diapers. After nap he picked out a new pair of undies.  He did have a few accidents that afternoon and he did not like that. By the end of the day I was done. I really contemplated if I could do this. Maybe he wasn’t ready, etc.  Hubs gave me a pep talk.

Day One:  0 successes – 4 fails  lots of trys!
Day One Triumphs:  got him to actually try on the potty and now he loves wearing undies.

I couldn’t put him in undies for bed time. He didn’t even make it once on the potty that day. So diapers it was. When he woke up he picked out a pair of undies to wear and we tried again.  He sat down and then a minute later he popped up and pointed to the chair. HE WENT!  We were so excited. We did a dance. We did stickers. We went and dumped out the chair. He then got to play a little bit on his video game.  It was a pee pee party. He did so well today. He went in the potty most of the day.  It wasn’t until the late afternoon things got hairy.  He didn’t take a nap so he was a little out of it.  I kept asking him if he needed to go but he kept ignoring me and he had quite a few accidents in a row. He was getting frustrated and I was getting a bit frustrated so almost an hour to bed time I broke out the diaper again.

How I’m Feeling
I’m only on day two and I’m exhausted. Potty training should be more like mommy training. It was so easy when he was in diapers. I didn’t have to ask him a million times if he would like to go. I didn’t have to watch for cues.  I feel like the past two days have been revolving around pee or poo.  I know that it will be good in the long run and maybe things will get easier. He really seems so accomplished and happy when he goes. I also know that when the new one gets here I might not have all the time I do now to shower him with all the attention he needs.
Don’t worry I won’t be doing play by plays on my blog everyday! Just wanted to share the first couple of days with you and just do updates here and there. If any of you seasoned momma’s have any helpful advice send it my way.  Here’s to Day 3!