I recently threw a baby shower for my friend Candice.  I knew I wanted to make a lot of the decorations myself.  My first order of business was to figure out a theme.  I have really been into colors lately than an overall theme-y party so I went with purple, green, cream/yellow.  We asked her before the shower what her favorite things were so we incorporated those into the shower as well.  She wanted foxes and sunflowers to be present because it reminded her of her grandmother.  She also likes peacocks so I wanted throw that in there somewhere too.  I took all of that information and a garden party shower was created. 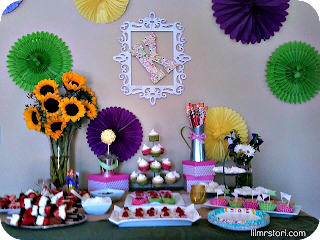 Here is the main table.  She is having a girl so I had to throw in a touch of pink!  I bought those rosettes already made and I also made some myself.  The frame was from Micheal’s as well as the K. The K I bought scrapbook paper and Mod Podge it to the wooden letter. 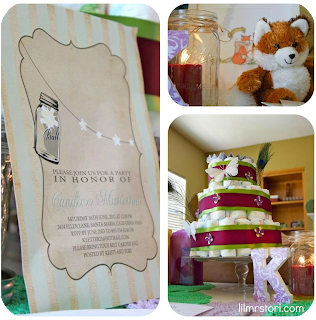 My inspiration came from the invitation.  I love using Ball jars for everything so I used them as vases and candle holders for the party.  I just wrapped twine around them to dress them up a bit.  I bought a little stuffed fox and a drawing of a little girl with a fox from an etsy store called Trafalgar’s Square.  I put it in a white frame and it looked so adorable on the table.  The diaper cake is where the touch of peacock came in.  I added little butterflies and peacock feathers to it.  The K is just a wooden letter from Michael’s that I ModPodged with some scrapbook paper.

I made a flag banner and added tissue paper pom poms to give my kitchen a little color.  I made the banner for her to use in the baby’s new room.  It is made out of fabric and ribbon. 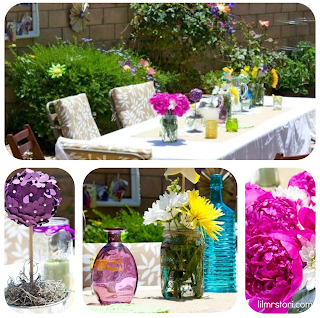 Here is the outside. It was my favorite part of the shower.  I used a white table cloth and used a burlap table runner.  I bought fresh flowers and used Ball jars as vases. I also put lots of candles out in jars too. I lined my stone gate with rosettes that I made.  The purple flower ball I made in different colors and had them sticking out of a tin bucket. 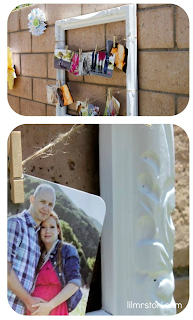 I found an old frame from a garage sale and hung pictures of her 3D ultrasound and maternity photos on it with mini clothespins. 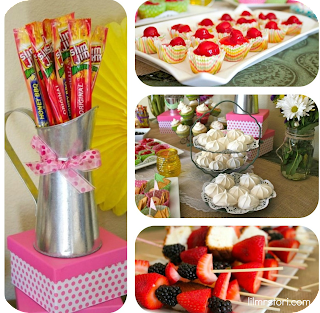 The food was simple finger foods.  She loves Slim Jims so we had to incorporate them in.   We had miniature hot dogs and hamburgers.  We also served mini cheesecakes and fruit kabobs. 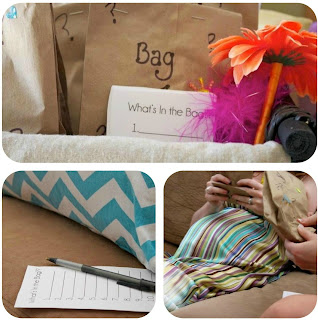 For the games we played a drawing game that is sort of like “telephone pictionary”.  Everyone gets a lot of scrap paper stack and you all sit in a circle.  You first write a random word and pass it to the person left of you.  That person put the word to the back of the paper stack and draws your word.  Then they pass the picture to next person and that person flips the drawing to the back of the stack then guesses the picture by writing the word.  It goes on and on until your original drawing gets back to you. It usually isn’t the word you started with! We also played “Guess What’s in the Bag”.  I put different baby items in a brown paper bag and they had to guess what the item was by just feeling.  We also played the old “Don’t Say Baby” game.
Overall I think the party was so pretty. I hope everyone had a good time. I did and I loved creating all the decorations!! 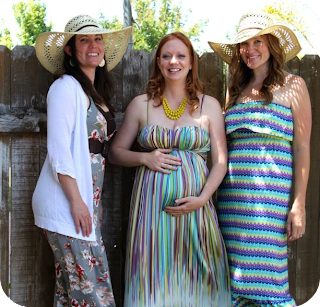 Kristi, Candice, and I.
Till’ next time!

Linking up to these great parties!