I am back from my trip!! We had such a great time.  Here are a few of our photos from our trip to Vegas. 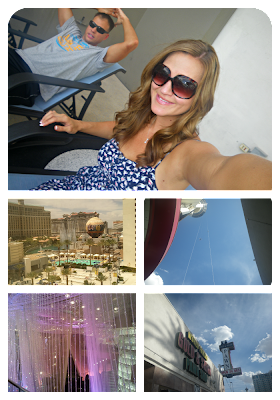 We stayed at Planet Hollywood and that was our view from the room! We had a nice view of the Bellagio Fountains.   We also watched our friend jump from the top of the Stratosphere. That’s J and I waiting at the bottom for him! We were too chicken to jump!  The bottom left photo is my new favorite hotel casino in Vegas: The Cosmopolitan.  It had a huge chandelier in the middle of the casino. It was super glittery.  We also visited the Pawn Stars shop while we were there.  We didn’t see anybody from the show but did see a lot of neat items they had there.   I did end up seeing Chumlee later in the week walking around in the Planet Hollywood Casino. I almost ran into him and I didn’t have my camera:( We ended up seeing 4 shows and ate at 2 buffets. I think I gained back all my weight I lost for the trip!!  All in all, it was a good time and a much needed vacation. 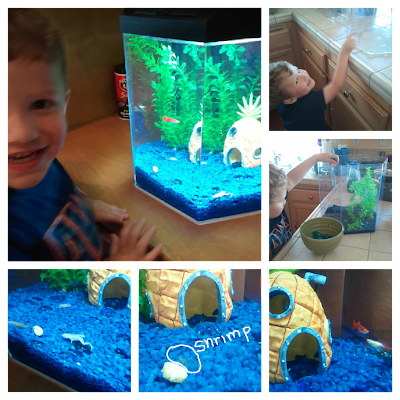 Over the weekend we decided to get B a fish tank.  He helped get all the rocks at the bottom and we went to pick out the fish. We ended up with two guppies we named Little C and Tila, two African Dwarf Frogs named Hip and Hop, and two ghost shrimp we named Kobe and Lebron. It’s quite the little habitat we got going on. B has been loving it.

Well that’s all for now! I plan on getting back into the swing of things this week! I ended up with a nasty head cold over the weekend that I still have. I’m hoping it will be on the way out soon!!! Hope everyone has a great Monday!